‘Tis the Season…for Quality Violations on Video and CTV Campaigns

Consumers and advertisers increase their spending during the holiday season. Unfortunately, this is also a time for increased quality violations on video and CTV campaigns – including across fraud and brand suitability and, sometimes, lower viewability rates. Video violation rates increased 46% in the U.S. during Q4 of last year compared with the average violation rate from the previous three quarters of that year, according to DV data. Moreover, DV found that the most significant increases in violation rates correlated with the major holidays in Q4 at critical times advertisers were most trying to reach their consumers. 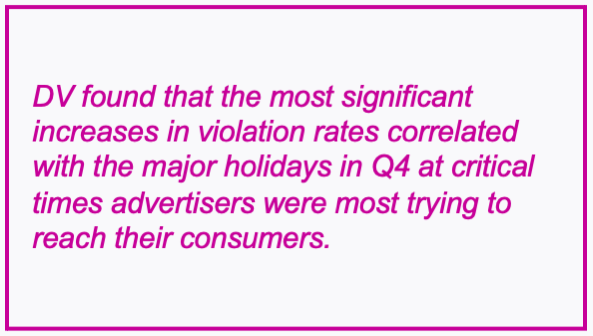 During the week of Halloween 2021, for instance, DV saw 15% higher video violations compared with Q4 overall. DV further observed eight percent and nine percent increases across video violations during the week before, and week of, Thanksgiving and Black Friday, respectively. On CTV inventory, which typically has the highest CPMs, DV saw significant daily spikes surging as much as 164% around Halloween, 158% around Thanksgiving and 59% around Christmas.

Given the business importance of the holiday season, and the rise in video ad violations, it’s essential that brands protect their campaigns and ad dollars so that they can drive the largest impact possible. The insights below can help advertisers prepare their holiday campaigns for their best Q4 yet.

Fraudsters are, unfortunately, always looking to capitalize on increased ad spend. Video, and especially CTV ads, have some of the highest CPMs – making them even more appealing targets for malicious actors.

In Q4 of 2021, DV saw 57% higher Fraud/SIVT for video ads compared with the average fraud rate of the previous quarters of the year. Fraud/SIVT on CTV, specifically, rose 88% in the same time frame. Bot fraud also saw a sharp increase of 56%, driven primarily by CTV, which made up more than two-thirds of bot fraud violations in Q4.

Importantly, some of the most significant increases across all video ad fraud/sophisticated invalid traffic (SIVT) violations correlated with the largest shopping holidays of the quarter, including:

These spikes illustrate exactly how popular CTV inventory is to fraudsters – especially during the holiday months. And they further underscore how important it is to ensure advertisers protect their CTV campaigns during this key period.

When engaging with consumers during the holiday season, it is especially important that your campaigns appear in the best light. This means the environments where your ads deliver must be suitable to consumers and align with your brand’s values. Unfortunately, this can be a challenge during the last quarter of the year, as competition for the most desirable inventory increases. 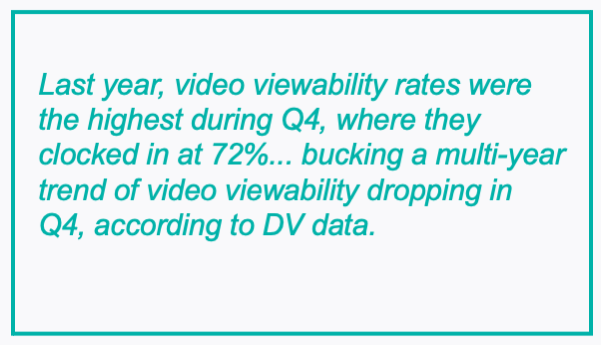 Although standard viewability measurement is not yet possible on CTV, DV offers Fully On-Screen to solve for viewability measurement challenges in CTV. DV’s Fully On-Screen is an MRC-accredited solution that solves for viewability challenges in the CTV space by providing insights into whether ad pixels are 100% on screen, and if impressions fire after the TV is turned off across certified inventory. In 2021, DV saw Q4 Fully On-Screen completion rates at relative parity with overall rates for the year, with a rate of 97% in Q4 compared with a rate of 96% for 2021 overall.

How to Protect Holiday Campaigns

Measurement is the first essential tool in an advertiser’s toolkit. Measurement allows advertisers to understand where their campaigns are actually running, how suitable the content environments are, if the placements are viewable and whether or not impressions are being served to real humans. With these insights, advertisers can optimize toward the most effective inventory to help deliver the greatest impact.

Pre-bid avoidance can prevent brands from bidding on inventory that is fraudulent, not suitable or out of the intended geography. This prevents ad dollars from being wasted before a bid is placed.

Blocking uses automated intelligence to prevent ads from appearing on undesirable inventory after a bid has been placed.

Video filtering works to prevent ads from delivering on unsuitable or fraudulent inventory  – even in environments where VPAID blocking is not supported, such as CTV and mobile in-app. While blocking prevents an ad from delivering after a bid has been placed, video filtering evaluates data from ad requests and filters out unsuitable impressions. This ensures advertisers don’t waste spend on placements that are fraudulent or not suitable for their unique campaign, while still allowing publishers to monetize the placement with another ad.

How DV Can Help

DV Video Complete is a multi-pronged solution that offers advertisers complete measurement and protection for their video campaigns – regardless of environment – across fraud, brand safety and suitability, viewability and geographical relevance. This solution includes measurement, pre-bid avoidance, blocking and MRC-accredited Video Filtering, along with specialized CTV protections, such as our MRC-accredited Fully On-Screen solution. DV Video Complete works across desktop, mobile and CTV so that ads can be measured and protected no matter how they are purchased, including direct and programmatic campaigns.

To learn more about how DV Video Complete Can protect your Q4 campaigns, reach out to Sales@doubleverify.com.