Election news cycles can be among the most challenging for advertisers to navigate, as DV discovered in a 2020 special report that explored the correlation between fast-paced news cycles and incendiary content. To help advertisers navigate the media landscape ahead of the 2022 U.S. midterm elections and 2024 U.S. general elections, DV formed the DV Election Task Force. This multidisciplinary group brings together a team of brand safety, suitability and content moderation specialists, as well as fraud experts from DV’s industry-leading Fraud Lab.

These category classifications allow advertisers to protect their brand reputation and ensure their ad dollars do not inadvertently fund harmful content. DV is able to track the scale of these categories via our monitored category traffic, which, given its large volume, serves as a relative proxy for traffic trends.

With this data, the DV Election Task Force is now providing weekly analysis to highlight ongoing trends ahead of and during the election news cycles. This inaugural blog will cover the months leading up to the election from  August 1 – October 7. Next week, we will review findings from the rest of October before beginning a weekly analysis.

Read on to discover content trends for the months leading up to the election.

Hate Speech Surges as Elections Near
DV’s ongoing analysis of category traffic rates associated with High-Risk Hate Speech began on August 1 and compares states with close senate and gubernatorial races to those without close races. The list of close races is composed of “battleground” races identified by the nonprofit and nonpartisan online political encyclopedia Ballotpedia. 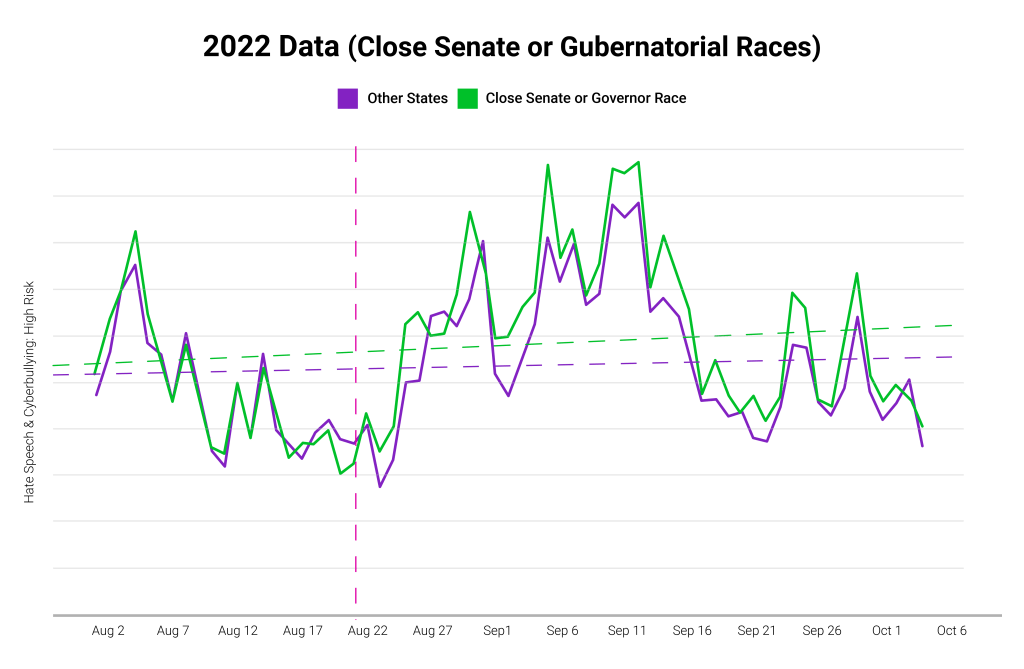 Key Takeaways
Average rates of hate speech have increased by nearly one-quarter (+23%) across all states in the weeks leading up to the November midterms (compared with the early weeks of August)). And for states with close senate or governor races, the increase in the average rate was even greater (+31%) –  notably surpassing the increase seen in states without close elections (+19%).

In addition, in geographically ranking hate speech by rate during the weeks of August 1 – October 4, DV found that the top-five states for hate speech were:

Top Content Themes Emerge Across Election Coverage and Inflammatory Politics and News
Beginning in mid-September, the DV ontology team, who use machine learning to analyze web page content and identify topics, began tracking the percentage of pages where the top 10 midterm voting issues appear. These issues are defined by Pew Research and include, in alphabetical order:

This capability allows DV’s task force to track the frequency and prevalence of specific topics being mentioned over time. In addition to analyzing a sampling of pages based on mentions of the midterm elections, the DV Election Task Force also began analyzing the percentages of these pages that were classified as Inflammatory Politics and News.

Key Takeaways
Although media commentators and pollsters have been split when it comes to the importance of abortion as a key midterm voting issue, relative to other topics like the economy and crime, DV findings show that its prevalence increased over time. And it ultimately became the most prevalent issue by mid-September (across DV-tracked content related to the midterms).